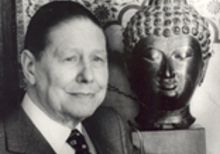 Ernst Waldschmidt, German Indologist, was born on 15th of July 1897 in the German town of Lünen, Westphalia. In 1918 he began his studies in Kiel after having served in the navy during the First World War. His teachers in Kiel were Indologists Paul Deussen, renowned philosopher, and Emil Sieg, one of the pioneers of Tocharian studies. After the sudden death of Deussen (1919) and the departure of Sieg to Goettingen, who followed Hermann Oldenberg, Waldschimdt relocated to Berlin. After gaining his Ph.D. in 1924, he was appointed assistant to Albert von Le Coq at the Berlin Museum of Ethnology. In 1929 he became curator of the museum and, subsequently, in 1934 he became professor. He left Berlin in 1936 having been appointed to the University of Goettingen, following his former teacher Emil Sieg.Only one year later he was elected as an Ordinary Member of the “Akademie der Wissenschaften zu Goettingen”. It was largely due to Waldschmidt’s efforts that soon after the Second World War (in which he served for six years), work on the Turfan texts could be resumed in close cooperation with the Institut für Orientforschung (East Berlin), a cooperation which was brought to an end by the erection of the Berlin wall. Thereafter, Waldschmidt established Goettingen as the sole center for Turfan studies. In 1965, he retired from the university. It was highly gratifying that he could live to see the opening of the Berlin Museum für Indische Kunst in 1971. It was largely through his personal engagement that it had been founded in 1963. Ernst Waldschmidt died in Goettingen on 25th February 1985.